Free agency is nearly here and the Indiana Pacers are looking to add some players to their surprising roster of last season.

Most of the rotation will appear to be the same, but options will be available for the team to upgrade at some spots.

In Part One, we analyzed in detail rumored targets of Tyreke Evans, Will Barton and Marcus Smart.

In Part Two, we’ll look at the veteran wings that are on the market this offseason that could add some immediate help in the short term while giving the Pacers flexibility to keep cap space in the next couple of years in some cases. Many of these players could probably be signed to deals similar to those of Bojan Bogdanovic and Darren Collison where the second season has a small partial guarantee.

Trevor Ariza is the prototypical 3-and-D wing. He’ll be in his 15th season next year at age 33 with a ton of playoff experience including winning a title with the Los Angeles Lakers nearly a decade ago.

He may be the most expensive option on this list but he’s also likely the best in both skill and fit. While rumors floated that he wanted something in the $50-60 million range over the lifetime of his next contract, Shams Charania reported that it was untrue.

Sources: Houston free agent Trevor Ariza, one of the top wings on the market, plans to schedule meetings with interested teams after free agency opens July 1. No truth on Ariza demanding $50-60M.

Ariza ranks in the 73rd percentile in spot up possessions which took up about 39% of his offensive plays per Synergy. At this point in his career, Ariza knows exactly who he is and what he’s good at. He’s not going to try to do too much or create his own shot but he’ll knock down the ones that are created for him (95% of his 3-pointers were assisted), and he’s a player that can guard multiple positions on defense. The offense that he creates is primarily through his own defensive efforts that lead to transition baskets.

Tony East of 8points9seconds.com did a terrific deep dive into Ariza and all that he brings to the court.

Good morning. I finally wrote about a free agent I really like and want the Pacers to pursue: Trevor Ariza: https://t.co/4dLEfeM9kt

The Italian shooting guard has played 11 seasons in the NBA and has shot a career rate of 37% from the 3-point line. Last year with his time spent split between the Hawks and the Sixers, Belinelli averaged a career high 12.1 points per game and has averaged at least nine points per game in each of the last eight years. Another player with a lot of playoff experience, primarily during his two seasons with the San Antonio Spurs.

He’s a bench scorer that can make some difficult looking shots. He’s not going to add much else other than his shooting. He can score coming off screens (85th percentile) but surprisingly struggled last year as a spot up shooter (30th percentile), making only 29% of his attempts. He was much better the previous season (68th percentile).

Belinelli can also make some nice plays out of the pick and roll though that wasn’t asked much of him in Philadelphia with Ben Simmons in command of the ball most of the time. In his small sample size, he ranked in the 99th percentile but only ran the play once per game. While running it with a little more frequency in the prior season with Charlotte, he still did well ranking in the 78th percentile. 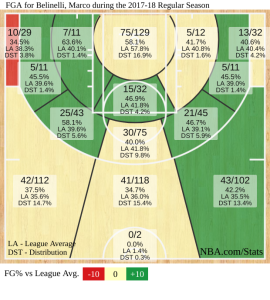 Belinelli is very good in the mid-range which may be more appealing to Indiana than many teams as the Pacers take more mid-range attempts than most teams in the league.

His real bread and butter comes on hand off plays, which is something the Pacers do often especially with Sabonis. Marco ranked in the 88th percentile on these plays and the Sixers would run them with designs on him getting a layup with either hand.

Wayne Ellington only shoots 3-pointers. This is closer to being literally true for him than almost anyone else in the NBA. He took 9.1 shots per game last season, 7.5 of those were 3-pointers. Ellington shot 39% on these attempts and made numerous shots with defenders draped all over him.

Here you see Cory Joseph stay with him almost step for step as he races around the screen, but it doesn’t matter. Ellington simply rises up and nails the shot.

He ranked above average in efficiency coming off screens (86th percentile) and as a spot-up shooter (76th percentile). Ellington, like Belinelli, has a lot of success on hand offs with 34% of his offensive plays coming in this category and ranking in the 80th percentile. These weren’t designed for him to get going towards the basket but instead he’d go up immediately on most of the plays straight into his 3-point shot.

Ellington will be 31 when his 10th NBA season starts this fall.

Redick is coming off of the largest 1-year deal in NBA history at $23 million. It’s unlikely he’ll get that kind of contract again unless the Sixers come up empty on adding something else with their space. The 34-year-old sharpshooter averaged over 17 points per game last season and is a career 41.5% 3-point shooter.

The problems with adding him to the Pacers is that he’s almost exclusively a shooting guard which is the same position as Oladipo. While Redick played about 20% of his time with the Sixers as a small forward (via Basketball Reference), his height would limit that to only occasional usage. He’s also been a starter in nearly every game he’s played in the last four years. While he’s much better than Bojan Bogdanovic, he couldn’t start at the 3.

Redick is a master at working off the ball to get open, whether that’s coming off screens (82nd percentile), taking a hand off (67th percentile) or taking advantage of the spot up looks he’s provided (91st percentile). He also hits absurd shots.

The Sixers would also use him in a kind of reversed pick and pop with him setting the screen for Ben Simmons, sometimes giving Redick an extra screen on his pop with Joel Embiid.

Based primarily on potential fit with the Pacers: