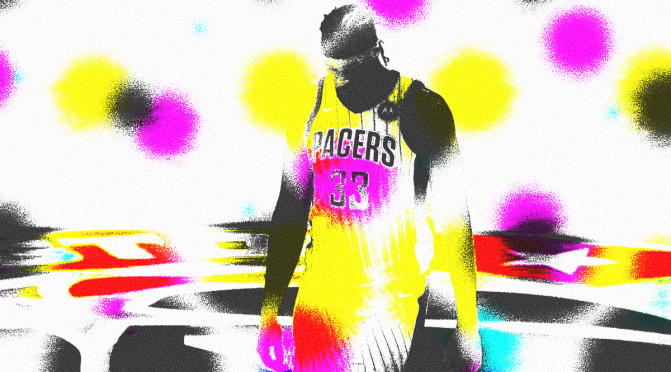 Myles Turner is not interested in an extension with the Indiana Pacers according to Bob Kravitz of The Athletic, who appeared on the podcast Setting the Pace.

“They have every reason to believe that Myles Turner is not going to sign an extension to stay here,” Kravitz said on Setting the Pace. “… It’s not me guessing here. Myles has no interest in staying in Indianapolis.”

Now, Turner has come out on Twitter to call “cap” at least on the second half of that statement (translation: saying that he is not interested in staying with the Pacers is false).

There’s a few possible reasons for the disconnect between what Kravitz reported and Turner’s feelings about his situation. The most likely would seem to be that Kravitz was told that Turner had no interest in signing an extension this summer and took that one step further to say he’s not interested in staying with the team at all. And while Turner may not be wanting an extension in the immediate with his value at a low point after a couple injury-plagued seasons, that doesn’t mean he’s closed the door on his time in Indiana completely. He could be looking to bet on himself getting his value back up while playing with Tyrese Haliburton but still being open to re-signing with the Pacers as an unrestricted free agent next summer.

For Kevin Pritchard and the front office, that’s a risky proposition when he could decide to go elsewhere and leave the team with nothing in return. You can see why a lack of interest in an extension would make the Pacers act with more urgency to trade him now or during next season.

In the less likely explanation, Turner could be calling this a lie in an effort to stay because he knows sticking with the Pacers for one last season gives him the best situation he’s going to have in order to get a big contract somewhere else. Playing with Haliburton could push Turner to new statistical heights and with a rebuilding team he could be in line for a bigger offensive role that he could hope to get with any contending team that would be wanting to trade for him right now.

While I believe Turner to be truthful about still potentially being interested in being a Pacer long term, could anyone blame him if he did just want to play elsewhere at this point in his career? He’s been in so many trade rumors over the last three seasons that this was his response when asked about the latest one last December at the time when the Pacers decided to move in their current rebuilding direction.

Listening to him there, it’s clear that Turner’s basically become numb to the endless rumors. While the Pacers can be commended for keeping players in the loop when they are close to being traded so they don’t first learn about being traded from Twitter, it wouldn’t be surprising if it made him a little numb to the only franchise he’s ever played for as well.

Over the years, he’s learned a new position offensively with a less-involved role to try and make things work on the court with Domantas Sabonis during the Turbonis era that was doomed by injuries on the roster every season even more than the less than ideal fit of the two centers. In the 2020 off-season, the Pacers included him an offer in a sign-and-trade situation that would have brought Gordon Hayward to Indiana. Even after Sabonis was traded for Tyrese Haliburton, there were still expectations that Turner would be dealt at the trade deadline this past year as well, and he may have been if not for his foot injury. Earlier this month with Turner in line to be the solo five for the first time since early in his career, the Pacers went after an upgrade at his position in Deandre Ayton, signing him to a max offer sheet that was promptly matched by the Suns.

It feels almost guaranteed that the team asked Turner about an extension at some point this summer and he told them he would prefer to play out the last year on his current contract given the Kravitz report, Turner’s response, and comments from Pacers General Manager Chad Buchanan at the end of June before the start of free agency.

“We’d love to see [Myles Turner] with us long-term,” said Buchanan per 1070 The Fan. “Whether that plays out or not, that’s kind of in his hands a little bit as well.”

With the timing of Buchanan’s statement, it’s possible that the Pacers pivoted to a big swing with Ayton after they knew Turner wasn’t interested in an extension. Either way, Pritchard and the front office are doing their jobs by trying to do whatever they think will improve the roster for the long term. You can’t fault them for trying to make the team better, just like you can’t fault Turner for wanting to go into free agency for the first time in his career. For the Pacers, this has to feel somewhat similar to the Victor Oladipo situation where he turned down an extension offer with his value relatively low at the time and the Pacers ended up trading him for Caris LeVert. Though we haven’t been hearing for months that Turner really wants to be in any specific place like we did with Oladipo and Miami.

With the Pacers entering a year without a goal of winning and a primary focus of growth and development, it’s easy to see why Myles wouldn’t be eager to sign an extension in that regard as well. At 26, Turner’s entering the prime of his career and has talked in the past of wanting to get beyond the first round of the playoffs where the Pacers were knocked out in each of his first five seasons. Maybe he would prefer to see how far along the team looks this season before committing long term.

If this does end up being the end for Myles and the Pacers, he’ll go down as the only really good draft pick the Pacers made between Paul George in 2010 and Chris Duarte in 2021 (no, Kawhi Leonard doesn’t count) and a player that has been here through the end of Paul George, the rise and fall of Oladipo, four different coaches, and too many injuries to count.

What the Pacers are doing now in their focus on developing their young players is not something that was ever the case for Turner when he was entering the league as he jumped right into a team trying to win as much as possible. (Can you imagine a big with a jump shot like Turner coming into the league today and being told not to shoot 3-pointers in his rookie season?) Say what you will about Turner’s counting statistics being rather stagnant while hovering around 12 points and 7 rebounds, but he’s also been remarkably consistent considering how he’s adapted to various roles in multiple offensive schemes and shared the floor with another center for a large chunk of his playing time.

Of course, Turner’s calling card in the NBA has been his defense where he’s blocked over 350 different players in his career and led the league in blocks twice. Often being the only thing keeping the defense above water when he’s been available the last two seasons.

Listen to the full Setting the Pace episode below:

One thought on “Deciphering the Myles Turner and Indiana Pacers situation”