Free agency is almost upon us. A time of Woj bombs and Shams-wows. A time of the surprising and the predictable.

The Indiana Pacers will be one of few teams with a lot of cap space entering free agency this year and will have plenty of options to pursue.

For perimeter players, we’ve already looked at some players in their prime (Will Barton, Tyreke Evans and Marcus Smart) and some wily old veterans that could serve as valuable role players.

Some veteran free agents that could fill valuable roles for the Indiana Pacers.https://t.co/akGIhIkJOX

Now, we look at cheaper options for younger players that are still somewhat unproven in their abilities. Some have served as role players in the past; some are still looking for that opportunity and may need more development time. These aren’t guys that are going to get anyone excited, but they might pay dividends.

We’ll start with two players that Indiana is reportedly interested in: Doug McDermott and Joe Harris.

This is My City

Harris had a great season with the Brooklyn Nets and made 41.9% of his 3-pointers on the season. He ranked in the 89th percentile in spot-up possessions, 75th percentile while coming off of screens and 84th percentile on hand offs. He’s an efficient shooting machine.

Harris has also added a few other plays to his offensive repertoire to make himself a more well-rounded threat on that end of the floor and actually led the league in shooting percentage coming off of drives to the rim. He’s selective on his drives to when he sees an opening but makes good use of his opportunities. He’s not a guy that plays above the rim, but he has a knack for finding ways to finish at the basket.

He isn’t someone that needs that ball a ton and had only a 16% usage rate with the Nets last season. He’ll be 27 when next season begins and entering his 5th season.

He’s not a terrific defender but all signs point to him always giving his best effort and being okay on that end. He’d be a terrific floor spacer and scoring option for the bench and one that shouldn’t be all that expensive to sign. He’s one of a few players on this list that made Kevin O’Connor’s Best Bargain FA List on The Ringer.

Dougie McBuckets. It’d be unfortunate if the Pacers signed him and never got to pair him with Joey Buckets after Indiana declined Young’s team option.

A lot of McBuckets/Pacers buzz right now. Not sure how it might impact reported (by @wojespn) potential pursuit of Aaron Gordon https://t.co/48yvNiIbXW

McDermott, like Harris, is another lights out shooter. The Dallas Mavericks originally had tendered him a qualifying offer but rescinded it in order to have more cap room to potentially sign DeAndre Jordan in free agency.

McDermott made 42.6% of his threes last season, including 49% after joining Dallas at the trade deadline. He’s another guy that doesn’t need the ball in his hands a lot and has never had a high usage rate. He’s not a primary option on offense but will knock down shots when he’s left open. McDermott was assisted on 100% of his 3-pointers last season.

He doesn’t run off screens and hit attempts very well, ranking very poor in that category at the 18th percentile at least while with the Knicks (data not available for this play type with the Mavs), but he’s never rated highly in this area in any of his last three seasons (with Synergy data available) in the league. Spot-ups are his specialty coming in at the 84th percentile.

He shoots much better from the top of the key and at the corners than on the wings. He likes little mid-range pull-up attempts but doesn’t hit them as often. 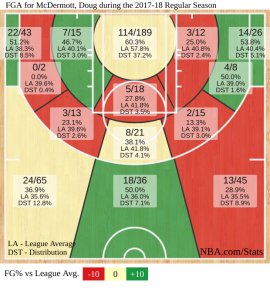 The 26-year-old, 6’8″ small forward played sparingly at the four and Kevin Pritchard could see him as a potential stretch four option that he so covets, but he’s played over 80% of his minutes every season at the 3. All in all, he just seems like a much worse option than Harris, as Harris does everything that McDermott does and has a more diverse skill set and better defensive effort.

The Orlando Magic decided to cut ties with their former 5th overall pick by declining the final year of his team option during the season like the Indiana Pacers once did with Solomon Hill. Now, the Magic are limited in what they can offer him and could be easily beat out by an offer if someone believes in his potential.

Hezonja showed some signs of life in his third year with the Magic and is still only 23 years old. Like Solomon Hill, he found some success playing as a small ball power forward, spending an estimated 58% of his time there according to Basketball Reference.

He still struggles with his shot and handle as he made just 33% from distance last season, but actually ranked in the 66th percentile in spot-up attempts. He shot over 40% in 2 of the last three months of the season, but that other month was a woeful 22%. So, there are some signs of life. He’s got really nice flashes of athleticism still, but signing him would primarily be in hopes that he can develop much further.

Many of these guys listed below would be worse bargain options than just keeping Glenn Robinson III, who may leave for a larger role elsewhere if he can find one. He could be a cheap 3&D target for many teams, but it doesn’t appear that he’s a priority for the Pacers at the moment.

My enthusiam for a signing would start to waiver after Graham.